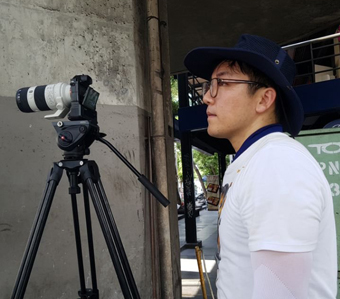 Hun Kim, a graduate of the Department of Media & Communication (major in Multimedia), was employed as a tenure-track assistant professor at Joongbu University in March 2021. Heon Kim received a doctoral degree in August 2020 with “The Effects of the Brand Extension of Movies on Box Office Performance in the Korean Film Market: Types of Brand-Extended Movie, the Number of Brand Extensions, and Perceived Fit” (Advisor Byeng Hee Chang).

After receiving Ph.D. degree, he participated in projects on various topics suitable for the Fourth Industrial Era, such as video contents and platforms, convergence contents including VR games, and AI speakers at SKKU’s Global Convergence Contents Lab. Also, he received the Grand Prize and Participation Prize at SKKU Start-up Contest for his idea of developing contents using AI technology.

In the field of video content, he won the Audience Award at the 2017 Seoul Pride Film Festival for his feature film <Tropical Night>. In 2018, he directed two feature films, <Her Family Has No Problem> and <The Cemetery of Sisters> and was invited to the JEONJU International Film Festival’s Korea Cinemascape section and Japan Yubari Fantastic Film Festival’s Yubari Choice section, respectively. He also gained experience in overseas production as a producer of the horror drama project <Folklore: Mongdal> of HBO ASIA, a global content company.

He was into a sport in his teenage years. When he was in a middle school, he created a soccer club and had a match with other schools. He also participated in the national sports competition by boxing in high school. He knew nothing else but sport. However, he became interested in the media communication field when he was in the military. He participated in the talent show with an aim to win a vacation. He planned and produced a comedy skit and even won at the talent show. He also participated in the K-Force Special Show, the biggest event in army, and showed off his talents. At that time, his senior, who studied at the Department of Mass Communication told him about the field of video production. After he was discharged from the army, he went to college at relatively later age than others and dreamed of becoming a video content creator.

What he learned at college made his dream more concrete. Especially, the special lecture of film directors that he took made him acknowledge of the new world (profession), film director. He has been working on the video with the film director he met at that lecture.

“With my vague motivation to make people laugh with my talent, I started creative activities. These were turned into video contents and again shaped as movies. I think this was possible because there was a fence called a university where I could think deeply about the advice of people around me and it put me into practice.”

The reason why he became a professor is because he grew his interests in academic. When he was an undergraduate, he consistently planned video contents and participated in various contests, dreaming of becoming a producer or movie director. In his fourth year of university, he realized that there are so many things to think about in the world while taking course related to media philosophy and sociology. In addition, he was ashamed of himself for making videos without any concern. I even blamed myself of making a bunch of meaningless videos. Since then, my interests in academic has grown considerably, and that interest naturally led to the entrance of SKKU’s graduate school.

In the past, the main factors to consider in the field of video contents were the 3 steps (plan-production-distribution). However, C.P.N.D. (content-platform-network-device) are now the important factors in making videos. In addition to simply creating videos, he thought it was one of the creator’s roles to create videos using various techniques in the digital environment and to deliver them effectively to users. In this circumstance, he has steadily gained interest in information technology as well as content, and he built up his capabilities by having various experience in immersive media, AI technology-related study, project and IT startup under the direction of his advisor (Professor Byeong-Hee Chang).

“Lately, there are terms that I hear or write at least once day; “Convergence” and “Fourth Industrial Revolution”. Originally, these terms used to be modifiers to modify media industry, but not it has become an indispensable key word for the media industry. In order not to fall behind the trend of this era, he studies carefully to deliver it to students and create convergence contents together. If we continue to learn the convergence perspective in college, I believe that students studying humanities and social sciences will also become indispensable talents in the fourth industry.”

There were some geographical benefits when studying at SKKU. There is Daehak-ro nearby and a branch of the Korea Creative Content Agency. He visited media-related exhibitions or went to watch movies with his academic advisor. There were many opportunities to see, hear, experience, and gain knowledge that was not obtained from books. Additionally, there were a lot to gain from SKKU in the academic field. He was able to conduct various studies using library, online DB, as well as departmental research facilities. He said he didn’t have any difficulties in studying except that he had to climb up to get to the Suseongwan at Humanities and Social Sciences campus.

It seems like his academic competence and practical experience were highly considered at recruting process of Joongbu university. He published a number of papers as first author in domestic and foreign journals, and carried out projects from various institutions such as National Research Foundation of Korea, Korea Creative Content Agency, KT, and Korea Arts Management Service during his Ph.D. These research and project experiences have played a major role in appealing academic competence. His long-established experience as a producer, director, and producer of movies was also appealed as a necessary ability to instruct students who want to enter the field of work.

When we asked his plan as a professor, he answered that he would like to focus on improving students’ competence in broadcasting/video and helping them enjoy their campus lives as a professor at Joongbu University for now. In addition, he said he plans to conduct various studies regarding convergence video content and service, which is his area of interest.

“A long time ago, my advisor told me to confidently speak up my dream of becoming a ‘professor’. Since then, if anyone asked me what I would do after graduating from the graduate school, I proudly said that I would like to become a professor. It was my first task to overcome any negative opinions of others. Once I got rid of doubt on myself, I’ve got a huge motivation. I think what needs to be preceded to achieve what you want is to overcome the negative views around you and believe in yourself. In order to believe in yourself continuously, I think you should constantly study and present a performance that can prove your ability at the right moment. Just like every dream, I hope you believe in yourself and challenge yourself to achieve what you want!”

- Many researches on media service including contents

- Feature film <Her Family Has No Problem> Scenario, Direction

- Member of Directors Guide of Korea