Participate in a contest before graduation 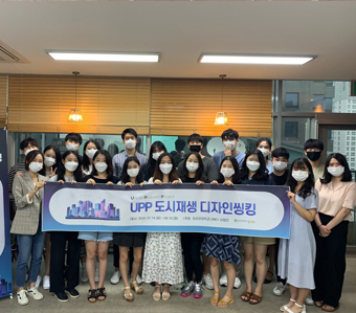 The Living Labs Idea Contest is aimed at finding problems and studying various solutions using the city and surrounding environment where we live as a laboratory. Hence, the team tried to solve the problem by focusing on the inefficiency of the transportation system in Suwon.

The team decided to participate in the contest after they saw the ‘UPP Urban Regeneration Design Thinking Education Program’ on the school’s notice board. UPP is an educational program to find and solve urban issues by applying the methodology of design thinking process. Minji Song took the program because she thought it was suitable for her field of interest or major. And four of the classmates who took the same program and had similar interests gathered and formed a team. In fact, the Living Labs Contest evaluates the ideas rather than perfect implementation of results at the level of undergraduate students. So, they formed a team with people who are interested in similar social issues without distinction of students from Humanities and Social Sciences Campus or Natural Sciences Campus.

A name of the team, GARATA, named as the way a shared bicycle sound. The content of team’s project is a Mobility as a Service (MASS, integrated transportation service). In other words, it is an integrated transfer service through the linked system of all public transportations. The team focused on revitalizing shared bicycles as a solution to the inefficient bus routes in Suwon. The names of shared bicycles in Gwangju and Daejeon are ‘Tarangke’ and ‘Tashu’. Such as these names, the team wanted to make a rememberable and interesting name.

When the name ‘GARATA’ came up, every member of team liked it and it became the final name of their team. Minji said that she was able to come up with various ideas because the team members gave ears to other’s ideas without criticizing or laughing even if they were not that good ideas.

In the process, there was no specific tactics or techniques. They just shared ideas on a daily basis via video chat, while the topic was not clearly set. They spent more than half of their time setting the topic. After the topic was set, things went smoothly.

“What’s special about our team is that we talked a lot and suggested realistic alternative to improving the existing one rather than creating a completely new one. Also, I think the fact that team members did their best in their own field contributed to the good results.”

Sangwan, the team leader, gave a clear presentation and Q&A, while Seoyoon researched interesting materials and organized them. Seohee helped on making PPT and UIUX. Minji created a nice team atmosphere and suggested many ideas. Although more than 80% of her ideas were weird to be rejected, the name of team and their topic came out from her ideas.

Minji said the most difficult thing during the process was a lack of her abilities. “I just came up with an idea, ‘Would it be better if a bicycle can be transferred from public transits? Haha.’ And it got into a serious discussion between team members such as MAAS and benefits of transport systems in different countries. But I was not able to be in the discussion due to my lack of knowledge.” In order to catch up, she recorded the details of the meeting and studied herself after the meeting. She studied as she was during the semester, so she earned and learned a lot after the contest.

She learned the overall flow of the contest, the process of completing one project, what to do in each process, how to write a project proposal, how to make UIUX, what the MAAS, living lab, and design thinking are, and current transportation transfer and fare policies. As she studied one topic deeply, she now has confidence to explain the field confidently at any time.

“I feel sorry for the team members, but I didn’t expect to win the prize. As I prepared for the project, I felt like it isn’t original. Most ideas that I had come up with were things that had already been implemented somewhere. Eventually, what we can do was to collect those good things and create the best. So, when we got the good result, I was happier because I wasn’t confident and didn’t have high expectation. Didn’t the judges give us a good evaluation because they experienced inconvenience of the transportation system in Suwon by themselves?”

Minji said she needed a great determination for the contest participation. She was confident that she was always a leader of team projects and did more than the assigned tasks. The contest was different from taking classes and it made her feel helpless. Unlike classes that are basically taken to earn credit, there are many students with willing to achieve something in the contest.

In the contest, there were many students with will to achieve something, unlike taking classes just to earn credits. Among these students, if you just kill time with the intention of simply adding one more line on your resume, you wouldn’t even make it to the finals. It’s no exaggeration to say that it takes a lot of time and you have to spend the entire vacation to work on a project. Nonetheless, if you are interested in the area and have a will to try, I would strongly recommend you to participate in a contest before graduation.

“At least, you will have an extensive knowledge of the topic you are working with. In the process of exchanging quality data and various opinions with team members who have same interests, knowledge will naturally be accumulated. You should definitely try your best as well. Moreover, I’ve earned a good relationship with student from different department and we still keep in touch.”

[Certificate of Award, Sangwan and Minji]