Two Ginkgo Trees in the Garden of Sungkyunkwan

In the garden of Sungkyunkwan, you can see two cloud-like ginkgo trees with branches reaching skyward. From the glory and prosperity of the Joseon Dynasty through the tumultuous early twentieth century with the Japanese occupation, World War II, and the Korean War until the present era of the Fourth Industrial Revolution, the trees have stood as an enduring symbol of the institution that bore withness to half a millennium of Korea's history.

The trees, which are the oldest features of the campus, have even survived numerous fires. They have watched quietly while countless students have passed by who would go on to influence the course of national events. The ginkgo trees are old and parts of them are even filled in with cement, but they are still full of vigor. The wildly firm branches that hold their places unwaveringly against the wind somehow remind us of a peaceful elder saint who seems to have experienced every sweet and bitter taste of life. 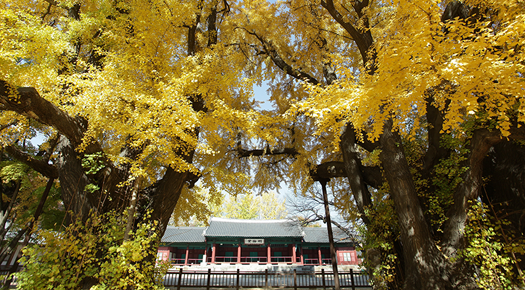 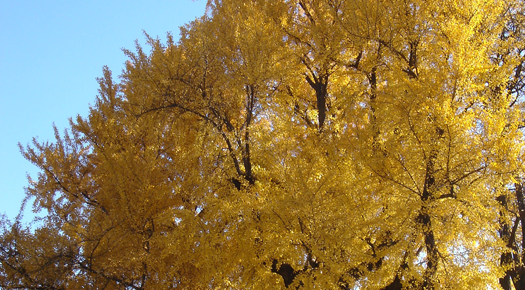 The ginkgo trees stand facing each other in the home of Korean Confucianism. For over six-hundred years, the leaves have grown in spring, cast shade in summer, and turned a bright gold then fallen delicately to the ground below in autumn. Now, the trees stand like two friends who have spent all their lives together and watch over us with their caring eyes from "The Dignity of Tree" by Lee Yang-ha.

The ginkgo trees here show a development of aerial roots hanging down from the branches, which is rarely seen in Korean ginkgo trees. Also, it is very interesting and unusual to note that the ginkgo trees in Sungkyunkwan are all non-fruit-bearing male trees.